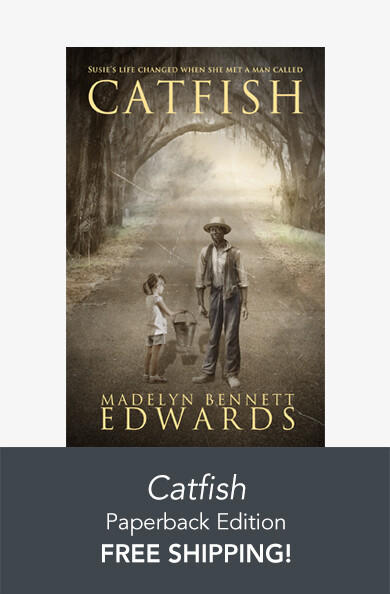 It’s the 1960’s and early 70’s in a small town in the Deep South where Susanna Burton, a white girl whose traumatic home life is hidden behind her father’s power, finds a forbidden world of love and acceptance with a Negro family. She falls for Rodney Thibault, a colored boy who gives her the tenderness and warmth she’s never known, when anti-miscegenation laws are still in effect. Even after the Supreme Court rules against these laws in 1967, the KKK, other white supremacists, and Susie’s parents continue to enforce them. From teenagers to young adults, while the two are forced to go their separate ways, date people of their own race, and live apart, the one thing that keeps bringing them back together is the patriarch of the Negro family, Catfish, who becomes Susie’s surrogate grandfather.

How this unlikely pair navigates the white girl’s physical and emotional abuse and the black boy’s and his family’s encounters with the KKK, forms the character and inner strength these two young people need to finally take charge of their own destinies.

The picture that depicts Catfish on the cover of this book is an actual man named Shadrack White. Mark Reid, who designed the cover, found the picture and checked to see if the photograph could legally be used.

“There are countless images of African American 'slaves' spread across myriad stock libraries,” Reid said, ”But they never have any soul. Most are staged by modern-day actors and photographers, and there is always something missing.” Reid believes that “something” is the look in their eyes that conveys the depth of feeling by those who have experienced hardship.

Reid felt Shadrack White conveyed the feeling we were looking for and sent the picture to me. I fell in love with Shadrack and after Mark removed his beard and walking cane, he became my Catfish.

Shadrack was a real man with a real story. He was the slave of John Randolph, a Virginia plantation owner, who freed his slaves by the terms of his will, executed prior to the Civil War. It took 13 years for lawsuits by next of kin to be resolved and a band of lonely and frightened former slaves to find their way north to the Ohio River.

After crossing the Ohio, the freed men and women traveled by canal boat northward and eventually settled in west central Ohio. A number of them formed the settlement of Rumley, located off state route 29 near McCartyville. A few moved to Sidney. Among them, Shadrack White.

For reasons history does not record, Shadrack obtained the nickname "Buddie Shang." Buddie quickly became a favorite among the residents of Sidney. He was well liked, and was often kidded about his two favorite things: fishing and corn liquor.

Buddie's motto, when referring to his need for the latter, was "I'm dry as a hoss." He lived in Lacyburg, a shanty town that was located along the canal feeder south of Water Street. The settlement was composed mostly of blacks, who were not especially welcome in Sidney.

Buddie ran a shoe shine stand outside one of the local taverns in town in the 1880s but was not permitted inside because he was black. The proprietor would compensate him by providing liquor in a bucket which Buddie would take home with him at night.

October 31, 1889 was a brilliant fall day. At 2 p.m. in the afternoon, as Buddie wandered down the towpath of the canal feeder, he became embroiled in an argument with a young resident by the name of James Edwards. During the dispute, Buddie fired a shotgun he was carrying in the general direction of Edwards, missing him, but striking the cottage of Lewis Nichols, a white man who resided in Lacyburg. Nichols appeared at the door, grabbed a brick laying on the ground nearby, and flung it at Shang. Buddie, then 74 years, ducked and the brick missed his head by inches.

"I was just foolin'" the old former slave shouted, but Nichols renewed his attack by throwing another brick at Buddie. The sound from a blast of his shotgun echoed through Lacyburg, and Nichols fell to the ground. He died several hours later. Sheriff Joseph Raterman arrested Buddie for the murder of "Soapstick,” as Nichols was known in the community.

Following his indictment by the Grand Jury, Buddie Shang stood trial for murder. Not many people in town gave Buddie much chance of convincing an all white jury that he had done nothing wrong in shooting a white man. However, Buddie believed he had acted in self defense. It was therefore with much trepidation that Buddie Shang faced a jury in the new Shelby County Courthouse on January 27, 1890.

After the evidence was presented, the jury deliberated a total of three minutes - apparently just long enough for each juror to attach his name to a verdict of "not guilty." After the jury had rendered its verdict, Hess slapped the eccentric old slave on the shoulder and said, "You're free again, free for a second time, Buddie. How do you feel?" Buddie is reported to have replied: "Dry as a hoss!"

Buddie Shang lived out the remainder of his years in Lacyburg mostly in the canal feeder and the Great Miami River. He died at the age of 97 in 1912.

“Shadrack was more than a slave,” Reid said. “He was more than a man. He was a genuine character, a scoundrel, and during a time when the color of his skin would surely have meant death by hanging in Ohio Penitentiary in Columbus, Shadrack stood his ground, stated his case, and was tried as an equal.

“This is a gentleman that I felt needed to be immortalized, and I feel blessed to have discovered his story,” Reid concluded.

It should be noted that Mark Reid is British and lives in Scotland. His penchant for history is only one of the many reasons he is a great book designer.

Save this product for later